Did you know that Las Vegas has a team for almost every sport? From baseball to basketball, football, ice hockey and soccer, there’s plenty for residents to enjoy year around. Interestingly, Vegas is often referred to as "The Mecca of boxing", a distinction it shares with New York’s Madison Square Garden. Without further adieu, let’s talk sports!

The Las Vegas Raiders is set to play in the 2020 NFL season, which will be located in Allegiant Stadium in Las Vegas, NV. Raiders, an American football club in the National Football League, move from its longtime home of Oakland, California, to Las Vegas, Nevada. For more information about Las Vegas Raiders, click this link: https://www.raiders.com/lasvegas/. To check out the Allegiant Stadium, click here: https://www.allegiantstadium.com/

The Las Vegas Aviators, formerly known as the Las Vegas 51s and Las Vegas Stars, are a Minor League Baseball team in the Pacific Coast League and the Triple-A affiliate of the Oakland Athletics. They are located in Summerlin, Nevada, a community in Las Vegas. For game schedules and tickets, please go to this link: https://www.milb.com/las-vegas

Las Vegas is the proud home of the Las Vegas Aces Women's National Basketball Association (WNBA) Team. Games are held at the Mandalay Bay Events Center, located in sunny Las Vegas, NV. For more information about the Las Vegas Aces such as tickets and game schedules, please go to this link: https://aces.wnba.com/

This women’s football team is part of the Women’s Football Alliance. The team plays their home games on the campus of Faith Lutheran Junior and Senior High School, which is nearby in Summerlin.

Also called “the Diamond in the Desert,” LVMS is one of the most respected racing complexes in the world, with 1,600 acres dedicated to road courses, a three-eighths mile oval, a dirt track and a modern drag racing facility. It’s also home to the NASCAR Nextel Cup Series, as well as Busch and Truck Series events. lvms.com 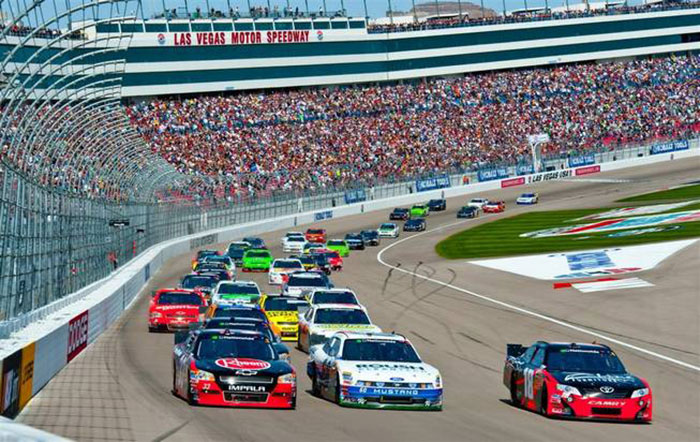 Celebrating its 50th anniversary in 2008, the NFR recorded a total event attendance of 173,975 over the course of a 10 day competition. The National Finals Rodeo, which is organized by the Professional Rodeo Cowboys Association, is the premier championship rodeo event in the US Wrangler Jeans is the title sponsor for the 10-day event, commonly just called the National Finals or NFR (also sometimes referred to as the World Series of Rodeo and the Super Bowl of Rodeo). The NFR is held each year in the first full week of December at the Thomas & Mack Center on the campus of the University of Nevada, Las Vegas (UNLV). nfrexperience.com

T-Mobile Arena is a multi-purpose indoor arena on the Las Vegas Strip in Paradise, Nevada, and is the home venue for the National Hockey League's Vegas Golden Knights. It's also used for entertainment events such as concerts, mixed martial arts, professional boxing events, as well as other annual sporting events. For more information or upcoming events, click this link: http://www.t-mobilearena.com/

This bowl is an NCAA-sanctioned Division I-A (FBS) post-season college football bowl game that has been played annually at the 40,000-seat Sam Boyd Stadium in Las Vegas since 1992. Since 2001, the game has featured a matchup of teams from the Pac-10 and Mountain West conferences. lvbowl.com

This arena is owned and operated by the Las Vegas Convention and Visitors Authority. Its primary use is for baseball and it is the home field of the Las Vegas 51s minor league baseball team. Cashman Field opened in 1983 and has a maximum capacity of 9,334. lvol.com/lvlc/cashman.html

This facility is located in the MGM Grand in Las Vegas with a seating capacity of 17,157 people. mgmgrand.com/entertainment/grand-garden-arena.aspx

The indoor arena seats 12,000 and is part of the Mandalay Bay Resort.mandalaybay.com/entertainment/events-center/

The multipurpose arena seats 9,500 and is home to the Las Vegas Wranglers ice hockey team. Located at the Orleans Hotel and Casino in Las Vegas, Nevada, it is operated by Coast Casinos, a subsidiary of Boyd Gaming Corporation. orleansarena.com

Are you a Cowboy? Come check out South Point Arena located in South Point Hotel & Casino in Las Vegas, NV! South Point Arena offers seating of 4,600 for indoor Equestrian and non-equestrian events. Plenty of concession stands with affordable pricing are spread throughout the venue and the restroom to guest ratio is higher than most arenas. Hotel guests also enjoy the Arena room channel completely dedicated to events held in the Arena. For more information, please click this link: https://southpointarena.com/