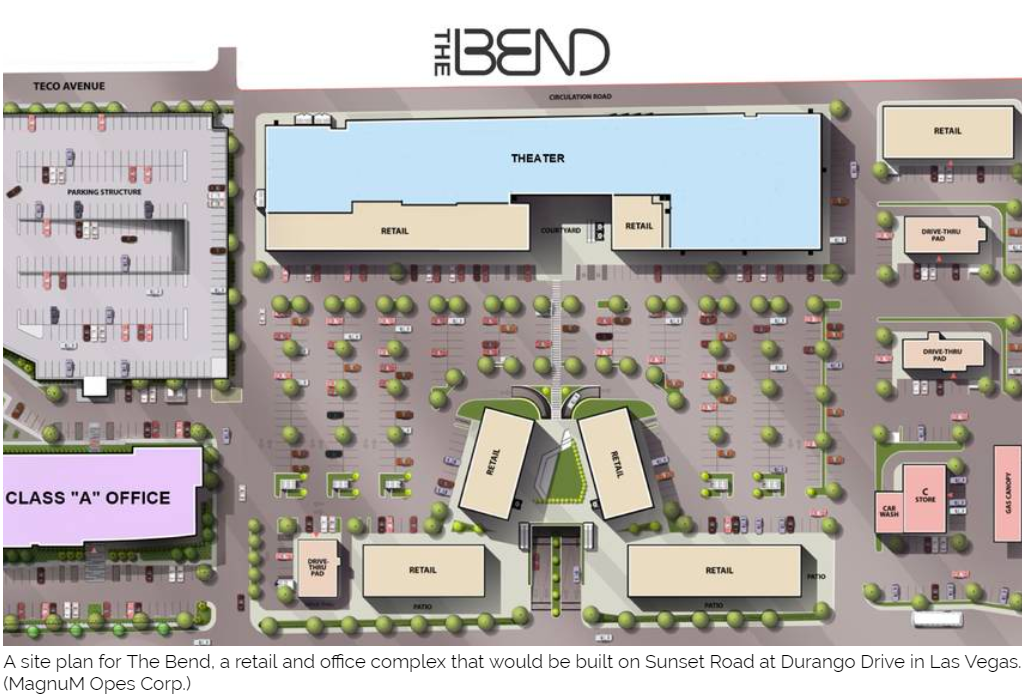 A retail and office project with a movie theatertaking shape across the street from IKEA.

The Bend, would span about 17.5 acres on Sunset Road. The plans have 200,000 square feet of retail, including a 13-screen Galaxy Theatres cinema, and a five-story office building.

If built, the project would bring entertainment and shops to the southwest valley, perhaps the fastest-growing area of Las Vegas.

It also would pump more construction into a pocket of town where other development plans never materialized, including an apartment complex by Peter Lik, the self-proclaimed world’s most famous photographer.

The Bend would be developed by three Las Vegas real estate investors: Dapper Cos. owner J Dapper, who holds about 9.7 acres and would build the movie theater and other retail space; MagnuM Opes Corp. owner Michael Panciro, who has 4 acres and would construct the office building and a two-level garage; and Dr. Dhaval Shah, an infectious-disease specialist whose 3.8 acres would also have retail, a site plan shows.

They aim to break ground next year and finish in 2019.

The Bend’s name is a spin on The Curve, a failed high-rise project from the bubble years that was supposed to be built across the street. The 215 Beltway curves there, and many people in real estate refer to this area as “the curve.”

Dapper said that he is in talks with eateries and other prospective tenants, and that he is close to signing a lease with Galaxy Theatres. Galaxy President Rafe Cohen on Thursday confirmed that he is in talks to open a 13-screen theater at The Bend, but said: “We haven’t finalized anything, let me just say that.”
Thank you Eli Segall