Summerlin Revealed Plans For A  Residential Complex Next To Downtown Summerlin.

The Howard Hughes Corp. plans are for a 9-acre, 267-unit complex.

The project includes one- and two-bedroom units ranging from 667 to 1,358 square feet.

There will also be a resident park and dog park, county documents show.

At this time the available information does not include the name of the complex. 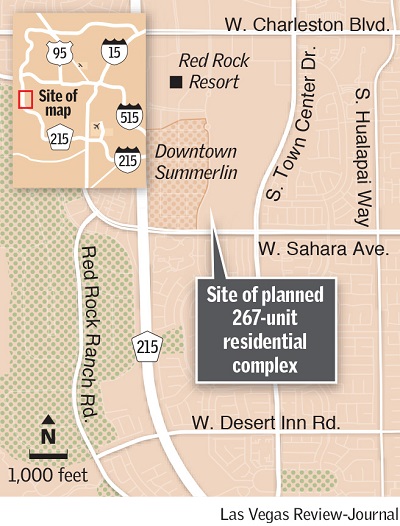 Tom Warden, a Howard Hughes spokesman in Las Vegas, said he could not yet provide additional details about the project, adding the company hadn’t finalized its announcement.

There is an apartment-construction boom in Las Vegas.  This project follows other projects underway just east of Downtown Summerlin.  The 106 acrea shopping center opened in 2014 and features department stores, restaurants and other shops.

The Dallas-based company and The Calida Group of Las Vegas teamed to develop Constellation, a 124-unit apartment complex off Charleston Boulevard and Town Center Drive. Construction started in 2015, and as of June 30, the complex was 93.5 percent leased, according to Howard Hughes.

Howard Hughes broke ground this year on a six-story office building near the ice rink.